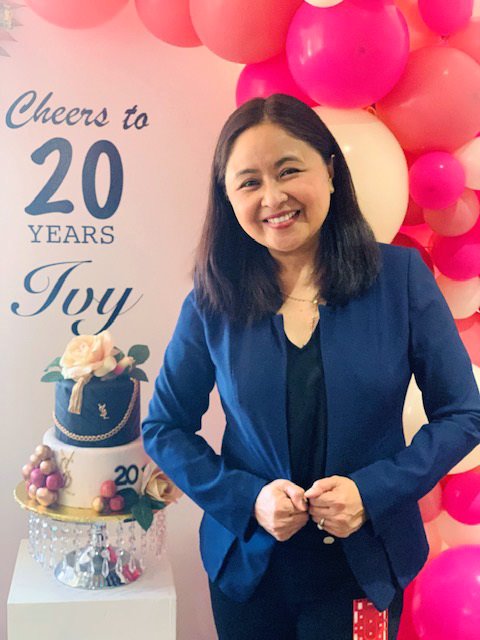 This month we celebrated the 20th anniversary of one of our core colleagues: Ivy Javaluyas. Ivy, for the few who don’t know her, is the Executive Director of Student Affairs which pretty much includes everything in the university outside of classes. Pastor Johnson and Ms. Kim have a lot of stories about her – all of them about how she has gone above and beyond for the university in the toughest of times.

Ivy’s story begins in San Pablo City, Philippines where her close-knit family put God at the center (like AUHS!).  She is the oldest of three sisters. Her father is a lawyer, and her mother is an English teacher. She received her BS in Mathematics (Actuarial Science) and went on for an MS in Management and Leadership.

In 2002, Ivy was hired as the registrar for the then American Institute of Health Sciences. She was drawn here by the mission of the school, and she has been a strong supporter of the American University of Health Sciences Foundation participating in most of their programs.

Ivy enjoys travelling with her husband and family, exploring food and culture of any new place she visits. Although most of her family is far away, she looks forward to being reunited with them this Christmas.

Her dream for AUHS is to expand globally with many more programs. No wonder, Ivy Javaluyas deserves this month’s spotlight. Although one of a kind, we need many more like her!