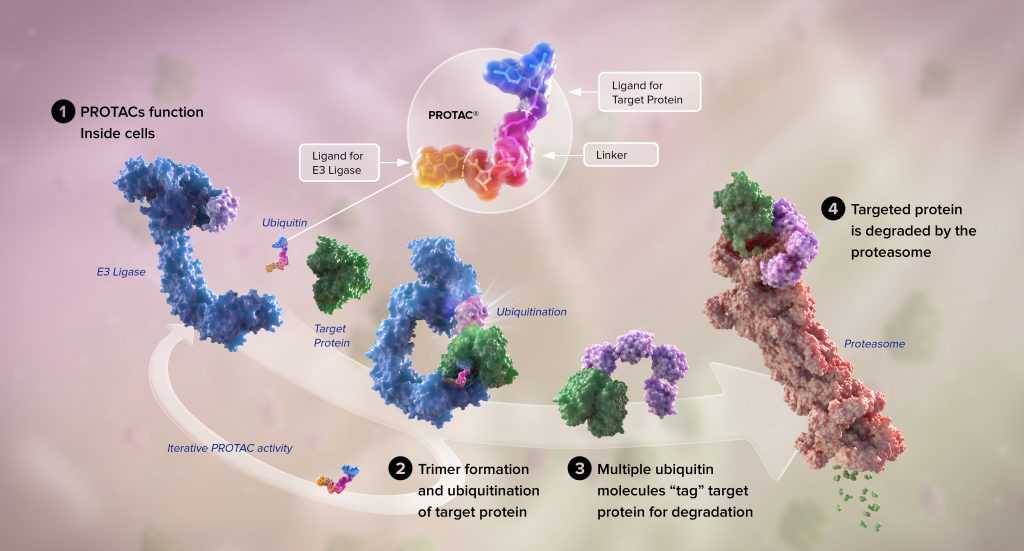 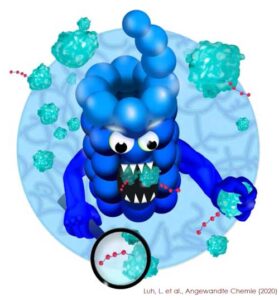 Identification of high-affinity small molecules that modulate the activity of target proteins has been used as a classical approach in the drug discovery and development process. Small molecule inhibitors not only have high cell permeability, which make them possible to target intracellular proteins, but also their size conform to Lipinski’s rule of five, which generally ensures them to be orally administered, thus leading to small molecule inhibitors being the main targeted treatment towards intracellular proteins. However, there are limitations that obstruct the durable clinical effectiveness of small molecule drugs. First of all, the inhibition is induced by occupying the active site of the target proteins. Only 25% of human proteomes are druggable, but the majority of human proteins such as transcription factors, non-enzymatic proteins, or scaffolding proteins, either lack active sites or have active sites but are barely suitable for occupying, thus making 75% of human proteomes undruggable. Second, sustainably high drug dosages are necessary for having therapeutic efficiency that often cause off-target effects. Third, the continuous exposure to the inhibitors can induce the mutation of target proteins, finally causing drug resistance.

Here, I would like to introduce a novel technology that has the potential to overcome most of the limitations of small molecule inhibitors. Human cells have natural mechanism to dispose proteins that are mutated, misfolded, or no longer needed. Any proteins that are tagged for disposal are then crushed by a cell’s own shredder, the proteasome. Many researchers have been trying to harness this mechanism selectively in the fight against diseases such as cancers. If it was possible to attach a disposal label to the proteins that cancer requires, these would inevitably be shredded by the proteasome, finally inhibiting the growth of cancer cells. Proteolysis Targeting Chimeras (PROTACs) have been extensively used as one of the protein degraders. PROTACs are hetero-bifunctional molecules, consisting of two different ligands and a linker between the ligands. One ligand is as a warhead to target the protein of interest and the other ligand is responsible for recruiting an E3 ligase. The rationale behind this design is that by bringing the E3 ligase in the close proximity of the protein of interest, ubiquitination and subsequent proteasomal degradation of the target protein will be triggered.

There are several major milestones for the development of PROTACs. The concept of PROTAC was introduced for the first time by Dr. Craig Crews and his colleagues from Yale University in 2001, and then the first peptide PROTAC was developed. In 2008, the first small-molecule PROTAC based on MDM2 E3 ligase was reported. The small-molecule PROTACs based on different E3 ligase, IAP1 were developed in 2010, and VHL and CRBN based PROTACs in 2015. In 2019, two PROTACs finally entered clinical trials in the United States.