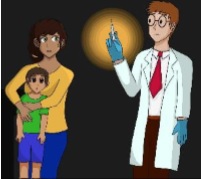 The Vaccine Adverse Event Reporting System (VAERS) is a national early warning system in the United States for potential safety issues with licensed vaccines. The Centers for Disease Control and Prevention (CDC) and the US Food and Drug Administration (FDA) jointly oversee VAERS (FDA). Reports of vaccine-related adverse events (potential side effects) are accepted and evaluated by VAERS. Anyone can submit a report to VAERS. Even if it is unclear if the vaccine caused the adverse event, patients, parents, caregiver, and healthcare providers (HCP) are recommended to report it to VAERS. HCPs are also required to record some adverse occurrences following vaccination.

One of the major drawbacks of VAERS data is that it cannot tell if the vaccine is to blame for the reported adverse event. This constraint has produced some ambiguity in the publicly available VAERS data, particularly in terms of the number of reported fatalities. There have been cases where reports of deaths following immunization have been misunderstood as deaths caused by the vaccines. This has caused immense irreparable damage to the campaign to increase vaccinations and return to any sense of normalcy re-opening businesses, schools, concerts, and many other gatherings.

VAERS has several advantages, including the ability to identify potential vaccination safety concerns that require further investigation using more sophisticated data systems, the ability to accept reports from anybody, and the data being publicly available. However, there are significant limitations: VAERS reports sometimes lack details and may contain inaccuracies; the number of reports may increase in reaction to media attention and greater public awareness; and data cannot be used to estimate adverse event rates.
For COVID-19, some fear that this may make it easier for people to spread misleading information. However, the Centers for Disease Control and Prevention (CDC) removes data that are blatantly false, such as a recent report supposedly made by Brazilian President Jair Bolsonaro regarding an adverse occurrence in a beach volleyball star. And intentional, misleading reporting to VAERS, which is a federal crime, appears to be uncommon. “We have no indication that there is widespread fraud or gaming,” says Tom Shimabukuro, deputy director of CDC’s Immunization Safety Office, which oversees VAERS.

For policymakers to make sound decisions that affect a large population, all scientific data must be communicated accurately. Only then will the public be safe, and the epidemic will be brought under control. To ensure that all lives are protected, science and research must continue to advance. The future appears bright and hopeful when accurate and honest data is available.