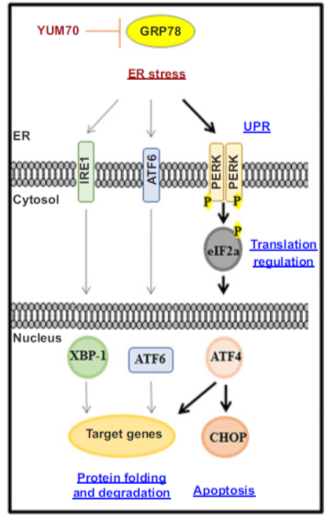 Pancreatic cancer remains one of the deadliest human diseases, and there are two first-line regimens for patients with pancreatic cancer. These regimens of gemcitabine/nab-paclitaxel and FOLFIRINOX have shown a survival benefit but at the expense of significant side effects. In addition, developing resistance and lacking response to the treatments limit the use of the first-line regimens. Therefore, there is urgent need to develop novel treatment options to overcome the current problems such as drug resistance.

Glucose-regulated protein, 78 kDa (GRP78) is a key molecular chaperone in the endoplasmic reticulum (ER) and a master regulator of ER stress signaling. Cancer cells are highly proliferative and have high demand for protein synthesis and folding, which results in significant stress on the ER. In order to respond to the ER stress and maintain the cellular homeostasis, cells activate the unfolded protein response (UPR) that promotes either survival or apoptotic death. Cancer cells utilize the UPR to promote survival and growth.

Dr. Yang majorly contributed in development of the hydroxyquinoline YUM70 analogs as novel ER stress inducers that bind GRP78 and inhibit pancreatic cancer cell growth in vitro and in vivo, demonstrating its potential as a therapeutic agent for pancreatic cancer. Also, the preparation and conjugation of fluorescent dye, BODIPY-NH2 and PROTAC degrader was performed by Dr. Yang to confirm the direct molecular target of YUM70 and the efficacy of PROTAC degrader in pancreatic cancer cells. The plausible mechanism of YUM70-mediated cell death involves the allosteric inhibition of GRP78 activity, leading to an increase in ER stress and induction of protein levels of UPR target genes such as PERK. Therefore, YUM70 treatment causes prolonged ER stress-mediated apoptosis by induction of PERK/ATF4/CHOP-mediated cell death in pancreatic cancer cells.