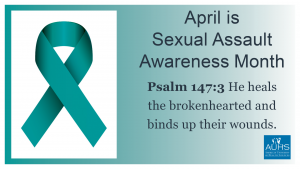 Psalm 147:3 He heals the brokenhearted and binds up their wounds.

April is Sexual Assault Awareness Month (SAAM) and American University of Health Sciences (AUHS) sends their thoughts and prayers to victims who have suffered or are suffering from sexual violence and abuse. SAAM is meant to bring awareness of sexual assault to the American public and educate people on how to prevent it, according to The National Sexual Violence Resource Center (NSVRC). America observed the first SAAM in April 2001, according to the NSVRC’s website. Ever since then, the NSVRC had helped “promote national unity for SAAM activities and encouraged “interaction and feedback from across the nation” in order to “build momentum to prevent sexual violence.”

Sexual assault is a violation of human rights and a major public health concern that affects millions of women, men, and children. Here are 10 things you should know about sexual assault.

You are not alone. If you have been a victim of rape or sexual assault, please call 911 or contact your local police department and visit your local hospital for immediate medical attention.