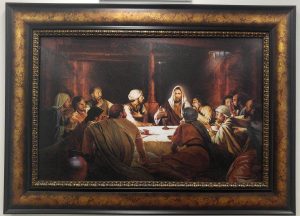 As Easter draws near, American University of Health Sciences (AUHS) reflects on Holy Week. Holy Week (or Passion week) is the last week of Lent and is celebrated by many Christian churches to commemorate the passion (suffering), death, and resurrection of Jesus Christ. This is a week to prepare for Easter Sunday, which is the most important Christian holiday because it is through Christ’s sacrifice that humanity became reconciled with God.

Holy Week is called a “moveable feast” which mean they are holidays that occur on the same day of the week each year but does not fall on a fixed date. (For example, in 2016 Easter Sunday was on March 27th but this year, Easter will be celebrated on April 16th, 2017.)

From Palm Sunday to Holy Saturday, here is an overview of what Christians observe throughout Holy Week.

John 12:12-13 The next day the great crowd that had come for the festival heard that Jesus was on his way to Jerusalem. They took palm branches and went out to meet him, shouting, “Hosanna! ” “Blessed is he who comes in the name of the Lord!”“Blessed is the king of Israel!”

Holy Week began this year on Palm Sunday on April 9, 2017. Palm Sunday is celebrated the final Sunday of Lent and it observes Jesus Christ’s triumphant return to Jerusalem in springtime, around the year 30 A.D. Jesus had spent months traveling throughout Palestine, preaching about the kingdom of God and healing the sick. Jesus came to Jerusalem claim His title as the Messiah that God had promised to the Jewish people. He was welcomed and worshiped by crowds of people who waved palm tree branches and laid their clothes before His feet.

Matthew 21:12-13 Jesus entered the temple courts and drove out all who were buying and selling there. He overturned the tables of the money changers and the benches of those selling doves. “It is written,” he said to them, “‘My house will be called a house of prayer,’ but you are making it ‘a den of robbers.’”

Holy Monday was celebrated this year on April 10, 2017. This day commemorates how Jesus entered the temple and found that its courts were filled with money changers and merchants selling oxen, sheep, and doves. Jesus overturned the tables, poured out the changers’ money, and drove them all out of the temple.

Matthew 21:21 Jesus replied, “Truly I tell you, if you have faith and do not doubt, not only can you do what was done to the fig tree, but also you can say to this mountain, ‘Go, throw yourself into the sea,’ and it will be done.

Holy Tuesday was celebrated this year on April 11, 2017. This day observes how Israel’s religious authorities challenged Jesus, questioning His right to cleanse the temple, among other things. The Pharisees made attempts to force Jesus to state that He had divine power from God so that He could be charged with blasphemy and even arrested. When their attempts failed, the chief priests plotted to have Jesus crucified. The chief priests conspired with Judas, one of the 12 Disciples, and paid him 30 pieces of silver to betray Jesus.

John 13: 13-15 “You call me ‘Teacher’ and ‘Lord,’ and rightly so, for that is what I am. Now that I, your Lord and Teacher, have washed your feet, you also should wash one another’s feet. 15I have set you an example that you should do as I have done for you.

Maundy Thursday was observed this year on April 13, 2017. On this day, Christians remember The Last Supper, when Jesus celebrated the final Passover with His Disciples. In The Last Supper, Jesus washed the feet of his Disciples and told them to live by His example. Jesus was betrayed by Judas and was arrested.

1 Peter 2:24 “He himself bore our sins” in his body on the cross, so that we might die to sins and live for righteousness; “by his wounds, you have been healed.”

Good Friday was observed this year on April 14, 2017. Good Friday commemorates the crucifixion and death of Jesus Christ. Jesus willingly suffered for the sins of man which led to humanity’s salvation. After He was condemned to death by Pontius Pilate, He was scourged, beaten, mocked, and forced to carry his cross. Jesus was crucified and died at 3 in the afternoon. According to Matthew 27:51-54, “At that moment the curtain of the temple was torn in two from top to bottom. The earth shook, the rocks split and the tombs broke open. The bodies of many holy people who had died were raised to life. They came out of the tombs after Jesus’ resurrection and went into the holy city and appeared to many people. When the centurion and those with him who were guarding Jesus saw the earthquake and all that had happened, they were terrified, and exclaimed, ‘Surely he was the Son of God!’”

Matthew 27: 62-64 The next day, the one after Preparation Day, the chief priests and the Pharisees went to Pilate. “Sir,” they said, “we remember that while he was still alive that deceiver said, ‘After three days I will rise again.’ So give the order for the tomb to be made secure until the third day.

Holy Saturday was celebrated this year on April 15, 2017. Holy Saturday observes the day that Jesus Christ was buried in His tomb after he had been crucified. It is a day of mourning and a somber reflection of a world without Christ’s resurrection. Israel’s Chief Priests had soldiers guard Jesus’ tomb until the third day because they suspected that one of His disciples may come, steal the body, and tell people that Jesus has been raised from the dead.

Matthew 28:18-20 Then Jesus came to them and said, “All authority in heaven and on earth has been given to me. Therefore go and make disciples of all nations, baptizing them in the name of the Father and of the Son and of the Holy Spirit, and teaching them to obey everything I have commanded you. And surely I am with you always, to the very end of the age.”

Easter Sunday or Resurrection Sunday was celebrated this year on April 16, 2017. Easter is a joyous celebration of how God rose Jesus Christ from the dead. According to Matthew 27:36-39, “While (the Disciples) were still talking about this, Jesus himself stood among them and said to them, “Peace be with you.” They were startled and frightened, thinking they saw a ghost. He said to them, “Why are you troubled, and why do doubts rise in your minds? Look at my hands and my feet. It is I myself! Touch me and see; a ghost does not have flesh and bones, as you see I have.”

AUHS is a private, for-profit, minority owned, minority serving, Christian-based university whose mission is to educate and equip students with life careers and to produce quality health care professionals for the community, the nation, and the world. It is a university where appreciation of life and one’s spiritual reason for existence can be nurtured.  AUHS offers a Bachelor of Science in Nursing (BSN), a Bachelor of Science in Pharmaceutical Sciences (BSPS) and a Master of Science in Clinical Research (MSCR). To request more information, email admissions@auhs.edu or call (562) 988-2278. For the latest news, pictures and videos of American University of Health Sciences’ events, like us on Facebook @auhs.edu and follow us on Twitter @AUHS_Campus and Instagram @auhsedu.