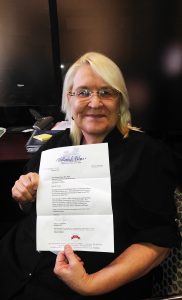 AUHS Professor Tracey Beltran-Flores with a letter from Hollenbeck Palms, thanking her and her Nursing Fundamentals class for donating a microwave in March 2017.

Students from American University of Health Sciences (AUHS) donated a brand new microwave to Hollenbeck Palms, a retirement home in Boyle Heights, California in March 2017. Tracey Beltran-Flores, an AUHS Professor, and the students from her nursing fundamentals class wanted to show their appreciation to Hollenbeck for allowing them to work in their long-term care facility for their clinical hours.

“Our clinical sites are very valuable to us. Having good clinicals is extremely important to have in a nursing school because even though you learn a lot in the classroom, it’s easier to put faces to diseases and medications,” said Beltran-Flores, “In order for students to learn how to become nurses, they need to be in an actual hospital or clinical setting and work with actual nurses.”

AUHS teaches several clinical courses but for many students at AUHS, Hollenbeck is their first clinical site.

Hollenbeck Palms was a “wonderful place” for the students to learn how to care for patients who are elderly and living with chronic diseases, according to Beltran-Flores. Elderly and chronically ill patients are often the main focus of nurses in hospitals and clinics. Some of the responsibilities Beltran-Flores’s fundamentals class had at Hollenbeck Palms included transporting residents to the dining room, helping feed, bathe, and change the patients, and making the patient’s beds. AUHS students also passed out medications, took the patient’s vital signs and glucose measurements, assisted with feeding tubes, and started IV’s.

“We get close to the residents. (Hollenbeck Palms) is where our students get to do their first care plan so they get to really find out about one particular person,” said Beltran-Flores, “(AUHS students) practice what nurses do which is data gathering, looking at labs, x-rays, medications, going to assess the patient, and coming up with nursing priorities. Students get to learn the nursing process at this facility very well.”

The residents at Hollenbeck Palms enjoyed having AUHS students not only for their care and services but for providing fun activities as well.

“It can be kind of depressing to be in long term care. (AUHS students) like to cheer the residents up by playing rhythm band and bingo. We also have karaoke and talent shows,” said Beltran-Flores, “When our students are doing the talent shows and karaoke, I see residents smile that have never smiled before.”

AUHS students from clinical courses often give gifts to their clinical sites at the end of their term to show their gratitude, according to Beltran-Flores. In the past, her students had given Hollenbeck large baskets of fruit and even baskets of coffee mugs. But this year, her fundamentals class decided to do something extra special.

“Hollenbeck had a microwave that was really small and slow. It really needed to be replaced,” said Beltran-Flores, “The class decided that we would pitch in $5 each and we bought Hollenbeck a much larger microwave.”

One of Beltran-Flores’s students was a U.S. veteran and used his military discount to buy the microwave at Target. The student bought the microwave a week in advance because he was excited to give Hollenbeck the gift.

“The students were so proud to give that gift! We had to march the microwave all over the facility to show (the Hollenbeck staff) what we got for them,” said Beltran-Flores.

The Hollenbeck nurses and staff did not expect the AUHS students to give them a new microwave.

“What you usually get as a nurse is pizza and chocolates,” said Beltran-Flores, “But food goes very quick and not everybody gets a piece so I figured that if we gave them a gift like this, it would be something that everybody could enjoy for years.”

“On behalf of all of us at Hollenbeck Palms, we thank the students of AUHS for thinking of us. Their kind donation of a microwave oven is greatly appreciated and will come in handy for our SNF staff to use on a daily basis,” wrote Heideman, “Our mission of attending to residents with great compassion, honest dignity, and genuine love can only be achieved through the collective efforts of our staff, donors, supporters, and friends. Thank you for this extremely sweet gesture on the part of your students.”

AUHS is a private, for-profit, minority owned, minority serving, Christian-based university whose mission is to educate and equip students with life careers and to produce quality health care professionals for the community, the nation, and the world. It is a university where appreciation of life and one’s spiritual reason for existence can be nurtured.  AUHS offers a Bachelor of Science in Nursing (BSN), a Bachelor of Science in Pharmaceutical Sciences (BSPS) and a Master of Science in Clinical Research (MSCR). To request more information, email admissions@auhs.edu or call (562) 988-2278. For the latest news, pictures and videos of American University of Health Sciences’ events, like us on Facebook @auhs.edu and follow us on Twitter @AUHS_Campus and Instagram @auhsedu.